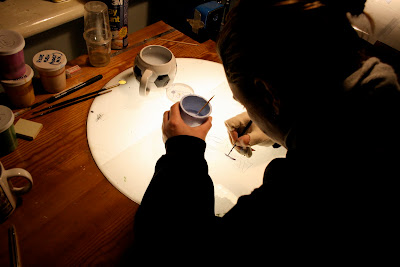 Sam Spacey hand painting a cel
I've been asked a thousand times: why did I decide to use traditional techniques to produce The Last Belle? Why hand draw, hand trace and hand paint artwork and then shoot it on to film using a clunking great rostrum camera when the rest of the world has moved into the digital realm?
Well... there are two answers really:
Firstly, a bunch of us got together to make this film almost as light relief to the commercial work we do. The chance to move away from the monitors and get our hands dirty - literally - with graphite smudges, splattered paint and textured paper, was a sensual pleasure. The same kind of pleasure you watch when kids are engrossed in cutting and sticking stuff together. It's amazingly satisfying in a very real, non-virtual, way.
But secondly, and more importantly, I wanted a chance (and probably my last chance, as old equipment like rostrum cameras vanish into the skip) to go through the old processes, and learn about some of the 'classic' techniques from veteran animation artists.
I came into the animation industry on 'Who Framed Roger Rabbit' and at 20 years old I was one of the youngest there. I was lucky enough to learn from the Disney veteran Stan Green (who had been assistant to the legendary Milt Kahl on many classic Disney films) and I became assistant animator to Richard Williams who was (and remains) amazingly generous with his vast knowledge of animation lore and technique. I was in the middle of all this, the archetypal kid-sponge, sucking up all the information I could. And then one day I went to bed and woke up 40 years old. Or so it seems. Then I was surrounded by a new wave of 20 year olds who - unlike me at that age - were already masters of their craft: the digital age of animation. So I had (and have) a lot more learning to do. 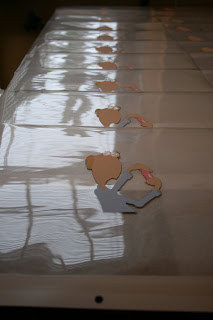 'The Last Belle' is the project I've used to bridge the gap between old and new. A chance not just to read about the 'old ways', but to try them all out for real, guided by veterans of the craft.The interesting next step is to combine the old with the new and see where it takes us...
Posted by Neil Boyle at 10:56 1 comment:

I've just been deleting a bunch of old text messages. But here's one for posterity - a message from John Leatherbarrow,  Director of Photography on The Last Belle, dated 26th October 2010, at 7:59 in the evening:


﻿All reshoots done and at lab. Chin chin. JL
﻿14 years after writing the script, the last frame was commited to film. To my knowledge this is the last time anyone will be shooting an animated short this way: 35,000 hand drawn, hand painted cels, shot onto 35mm movie film on a rostrum camera. (If I'm wrong about this I'd be happy to hear.) 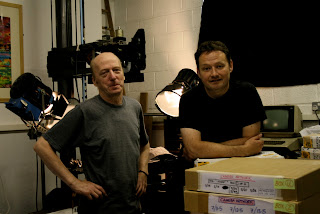