One of the most professionally rewarding - and happiest - two years I ever spent was working with legendary director/animator Richard Williams, and producer Mo Sutton, on 'The Animator's Survival Kit - Animated' DVD series, originally released in 2008.


When I started work on this project I had already worked with Dick Williams on commercials, and two feature films: Who Framed Roger Rabbit and The Thief and the Cobbler; but more than any work I'd done before, these DVDs changed my approach to animation, and made me feel for the first time that I had a much stronger technical control over what I wanted to achieve in a scene. Animating actually became fun - a pleasurable challenge - rather than an endless, gut-twisting, sweat.

Building upon Dick's original book, we animated over 400 examples of the animator's craft, incuding timing and spacing, walks, runs, flexibility, overlapping action, weight, dialogue, and directing. Dick Williams and Mo Sutton have now taken 100 of these animated teaching examples and converted them for use as an App for the iPad. Also included in the App is a complete copy of the Expanded Edition of the Animator's Survival Kit book, and Dick's previously unreleased 9 minute animated film 'Circus Drawings'.

And here's a review on Animation Scoop.

A fun day today: I was invited to screen The Last Belle to an enthusiastic audience at Southampton Solent University, and afterwards did a Q&A with the students who are currently studying animation there. 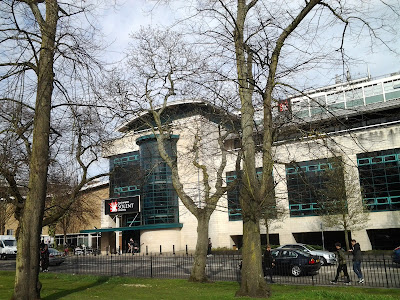 It's always incredibly energising to meet students, some of whom will eventually be the 'new blood' of the industry. And it's equally inspiring for me to see how many young students still have a passion for drawn animation, and want to see it as a viable career path alongside the digital/3D technology. The magic of watching drawings that think, walk and talk, never seems to fade, generation after generation.

Thanks to Charles MacRae and the other faculty members who made me feel so welcome, and to the students for asking a bunch of very smart questions.

To make ammends for my last posting's verbal avalanche, here are a few simple sketches for you. I'm really digging back into the storage boxes now, finding earlier and earlier ideas that never made it into the final film. 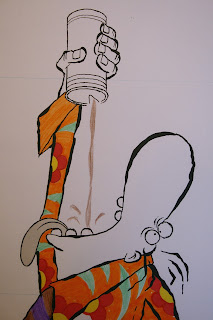 In the first drafts of the script I elaborated on just how drunk Wally was getting prior to meeting his date, creating a quick montage sequence of his daily life, always with a can of beer in his hand...

Cooking in the kitchen: 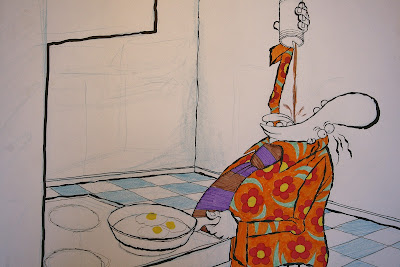 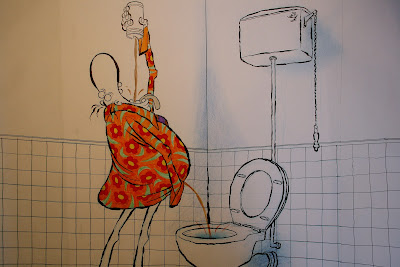 My own attempt at a perpetual motion machine.

It's silly. It's juvenile. It got cut out of the script.

But it still makes me smirk.
Posted by Neil Boyle at 06:36 No comments:

What We Can Learn From Pins

Adam Smith (1723-1790) was - among other things - a pioneer of political economy and the author of 'An Inquiry into the Nature and Causes of the Wealth of Nations'. 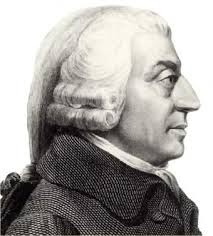 So what? you might ask. What's Adam Smith doing here, poking his intricately engraved face into this animation blog?

Today is my birthday. So far as I'm concerned birthdays are days meant for a little self indulgence, without the guilt. On my last birthday I hijacked this very blog to share with you some of my favourite artists and film-makers. This time I want to share with you my thoughts on.... well, like I say, bear with me if you will.

One of the most famous passages in Adam Smith's book 'The Wealth of Nations' concerns an analysis of how a simple metal pin is manufactured. He figured that to make a pin requires eighteen separate processes, such as drawing out the wire, straightening it, cutting it, pointing it, grinding it to receive the head, and so on... right through to inserting the finished pin into paper, ready for sale. And he worked out that if one person sat and performed all these tasks, operating single-handedly all the necessary machinery, he could barely make more than one finished pin in a day.

But Smith noticed that if ten people were employed and were trained to specialize in just one or two of the eighteen processes that went into the making of a pin, they could collectively make forty-eight thousand pins a day, or the equivalent of four thousand eight hundred pins a day each.

The Industrial Revolution was about to be born...

Fast forward to the the early part of the twentieth century and an animator called Dick Huemer was struggling to meet his deadlines when he realised that rather than sitting down alone to produce the hundreds of drawings required for his scene he could  draw just the main poses and leave the in-between drawings to an assistant - a division of labour that radically increased the amount of animation he could produce each day. The concept of Key Drawings, Inbetweens, and the charts that showed the assistant where to place them, had been invented!

By the 1930s animation had moved from being an almost solitary pursuit to a fully industrialised process: writers, producers, directors, concept artists, layout artists, supervising animators, animators, clean-up artists, inbetweeners, and on and on, with each department becoming increasingly specialised. And now, with the development of digital animation, this process of specialisation has increased almost exponentially. Look at the lengthy credits at the end of any major CG film and you'll see a vast army of character builders, riggers, texturers, cloth simulators, hair simulators, pre-lighting technicians, and people with credits I can't even understand. A digital '3D' film now costs, on average, two and a half times more to make than the traditional hand-drawn equivalent did (even adjusting for inflation) and employs two or three times the size of crew, each person with a unique area of expertise.

There is a lot to be said for this process of industrialisation: it drives technology, creates more tools for us to use, creates jobs, and promotes a greater quantity of high quality (at least in terms of craft) films for an increasingly large audience. But there are downsides too: the more expensive movies become to make, the more likely the content will be compromised artistically; and behind the scenes, crew members can begin to feel like ever-shrinking cogs in an ever-expanding machine - each making smaller and smaller marks on a bigger and bigger canvas.

For me, this is where the fun of making a short film comes in: it'll probably take you years to complete your personal labour of love, and you'll probably lose a ton of money doing it, but it is a wonderful chance to roll up your sleeves and get your hands dirty with all the processes that go into the making of a film. During the making of The Last Belle I had a small and wonderful crew of people bringing their talents and crafts to the project. But I also had the chance to dip my hand in everywhere and try a bit of everything. The result: I found that there is something immensely satisfying in being both the director of a project (sitting in my ivory tower, so to speak) whilst also being the guy covered in sweat and paper cuts who has to haul into storage 75 heavy boxes of artwork up a vertical ladder.

Tim Burton, commenting on his early attempts at animation, once said: What I feel really good about, really happy about, is that I did not go to film school. I went to CalArts and went through animation, where I got a very solid education. You learn design, you draw your own characters, your own backgrounds, your own scenes. You cut it, you shoot it. You learn the storyboarding process. It's everything, without the bullshit of film school...

I learnt a lot from making The Last Belle, and had tremendous fun into the bargain. So if you're reading this and you have a hankering to make your own short film - a hankering you haven't quite got around to satisfying yet - I can say this: Get To It! Go on..! Roll up your sleeves and plunge in. It'll probably take you forever, it'll probably eat up all your savings, and on several occasions you'll probably wonder why you ever began... But you surely won't regret it.

You'll bring into the world one single, and one very unique, shiny little pin all of your own.

Good luck. Get to it!