Here are three sections of the background artwork for the 'falling drunkenly through the London Underground' sequence of The Last Belle, designed by layout maestro Roy Naisbitt: 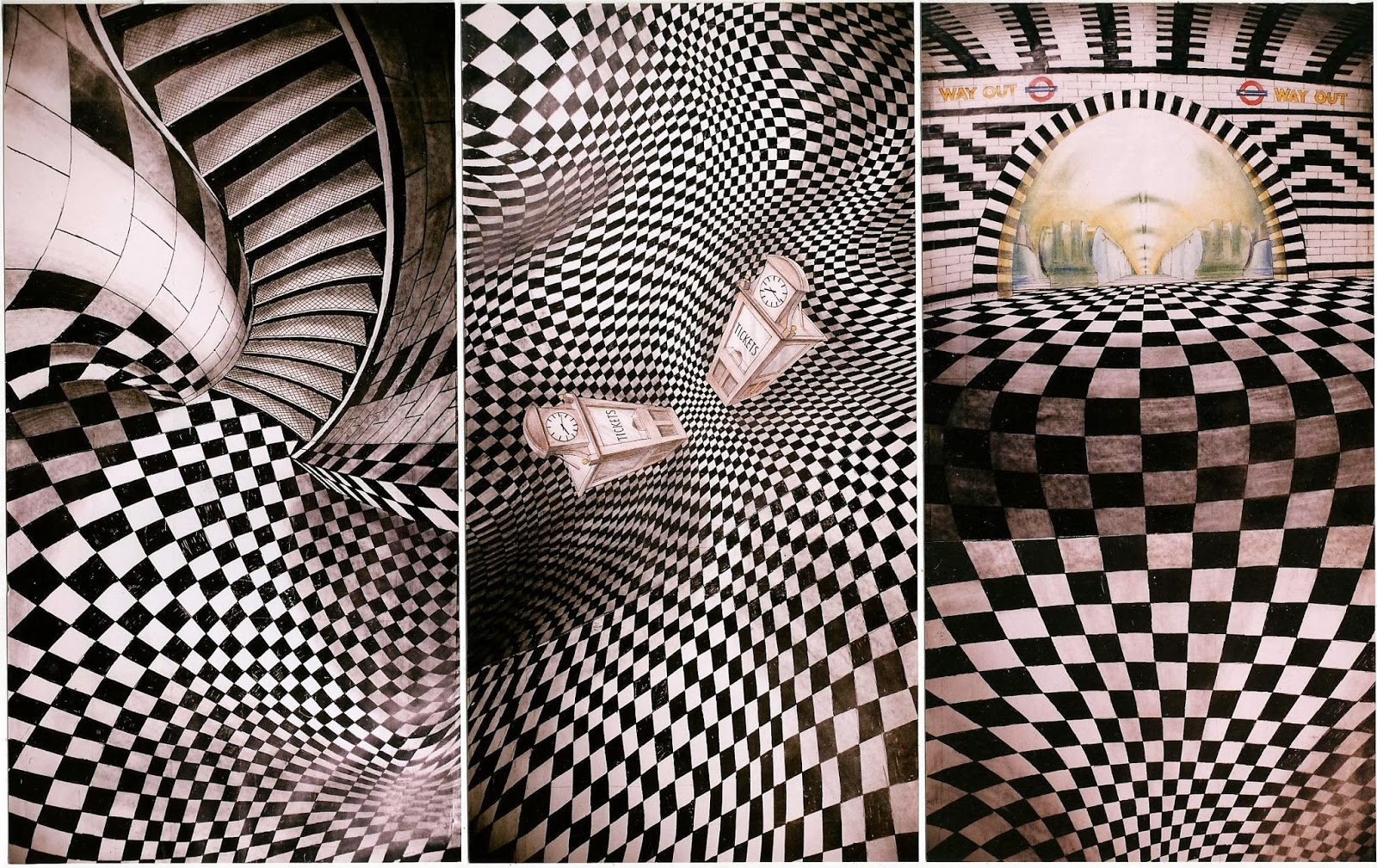 The brief was to design these backgrounds so they reflect the drunken state of our central character - all woozy, billowing shapes and lines.

﻿The three sections in this picture are physically joined together onto one long roll, but separated in this photo so they're easier to view here. In fact these three images make up only about a third of the full length of this particular background. At some point I must get around to having the full extent of the artwork photographed as some of these backgrounds are over 35ft long, and 30inches wide, to accomodate the dynamics of the camera wildly zooming and rotating across them. The artwork was never intended to be viewed like this; in the final sequence each part is revealed only in small chunks as the camera passes along. But nonetheless, seen out flat like this, they still have an incredibly mesmerising charm. 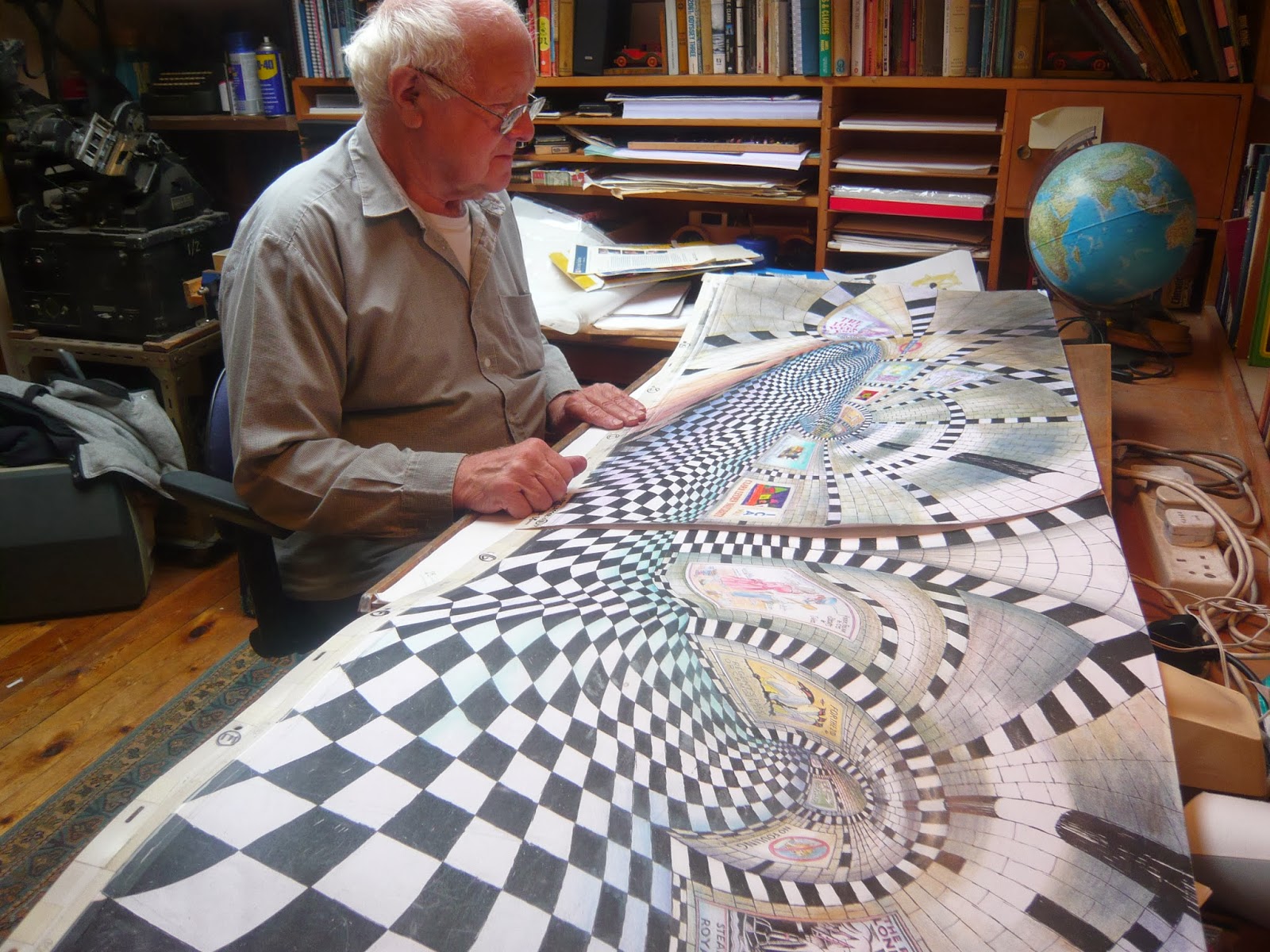 Bravo to Roy Naisbitt, a truly unique artist! I count myself extremely privileged to have his beautiful contributions in The Last Belle.

Here are a few more scribbles, sketches and drawings from the dauntingly large Last Belle artwork mountain... more or less randomly plucked from the top of three boxes:


Since finishing The Last Belle I've begun to dabble a little with digital drawing rather than paper based drawing. Each medium has its pros and cons but - aside from the onscreen imagery - I'm constantly struck by how interesting it can be to flick through a paper pile of long-forgotten sketches, storyboards and animatics. Had I done this work-in-progress stuff digitally I probably wouldn't have such a linear collection of pictures with which to reignite my otherwise cloudy memory. With digital drawing the tendency to delete, update, and adapt old variations (or simply lose stuff in a labyrinth of folders within folders) seems inescapable. But in the world of paper the process of having to physically 'update' an image - in other words, do a whole new drawing - automatically creates a paper trail which marks the evolution of your thought process. Chuck it in a box and it'll still be there in a few hundred years time. And in a format that's still readable.

Now, I make no claims that The Last Belle will be of the remotest interest to anyone - outside of my own family - in a few years time. But... it got me thinking about film history in general.

I had an interesting moment a few months back when I went to a screening of Alexander Mackendrick's  'The Man in the White Suit' (1951) at the British Film Institute. Well, I call it an 'interesting moment', but in fact I was beside myself with excitement. To an embarrassing degree. Those of you who have followed this blog for some time will know that Mackendrick is something of an idol of mine, and the films he directed at the Ealing Studios in London are some of my favourites. Outside the screening room, sitting in a glass case in the foyer, was Mackendrick's own shooting script for 'The Ladykillers' (1955):

I had no idea Mackendrick drew detailed storyboards over the pages of his script, and crossed them through as he shot the scenes. What blew me away was seeing the thinking behind images that are so familiar to me from years of endlessly watching these movies. It was like drawing the curtain back to uncover the Wizard of Oz pulling at the levers - the very workings of an amazing set of images being revealed.

I pored over those sketches forever as they revealed the thinking behind of the compositions, the editing, the blocking, and the underlying visual psychology of the scenes.

For all the brilliance of the digital world - and I do think the technology is a truly wonderful and democratic advancement - I really hope that the archiving of digital pre-production artwork is something that is actively pursued - not just the big, flashy concept art stuff, but the scribble on the back of an envelope that solves a story problem, or the record of an idea that never quite made it. It's easy to chuck paperwork in a box but harder to log, and keep updated in a readable format, the digital equivalent. Not impossible of course, just something that takes more active curating.

It'll be an interesting issue for future film historians. While we'll always have the big 'Art-Of...' books that accompany mega-releases it'd be nice to know that smaller films, and more personal films, also have their birthing pains recorded for posterity. I doubt very much that Mackendrick felt there was any importance to his own working sketches outside of their value to him, on set, as an aide memoire. But to me,  and I'm sure to many others, they're like gold dust.
Posted by Neil Boyle at 15:24 No comments: