A belated welcome to Cartoon Brew, and more recently to the folk at Big Screen Animation, who have been kind enough to post articles on The Last Belle - and thanks too to the people who have taken the time to leave comments. It's hard to imagine how much more difficult it must have been only a handful of years ago  (before the internet, basically)  for people hawking their films around festivals and trying to get a gauge of audience feedback...

...And on the subject of how much things have changed in so very few years, after my recent posts on the rostrum camera I got to thinking about some of the stories our cinematographer John Leatherbarrow has told me from his decades of experience in the business. For example, it wasn't so very long ago that all animated maps and diagrams on television were still hand drawn, hand animated with their arrows and moving dotted lines, etc, and photographed on 16mm film. As John has explained to me, for a breaking news story the artwork would have been prepared somewhere like the BBC graphics department, biked over to his rostrum facility in Soho, where he shot like a maniac (no time for mistakes or re-takes, he had to get it right first time), after which John would often leap onto his own motorbike and tear around at illegal speeds to the laboratory which would then process like crazy to develop the 16mm print, which would then be biked back to the BBC and cut to length against a voice over, and finally (presumably after telecine transfer) be broadcast, all by the skin of their teeth. And this wouldn't be an occasional bit of stress, but a daily event. It was the only way to do it then. As I say, this was not so many years ago, but it seems like a whole different age now.

At the Disney studios the amount of time between the relatively crude black and white Mickey Mouse cartoon 'Steamboat Willie' and the lush, full colour complexity of 'Snow White and the Seven Dwarfs' was a mere 9 years - an incredible period of artistic change and technical development. It feels to me like our industry has, in the last several years, been going through - is still going through - another period of incredible change and development. This is a very exciting time to be sitting at our drawing boards, syntiques, or monitors. Even for people like me who want to bring a few of the more archaic techniques along for the ride.
Posted by Neil Boyle at 14:27 No comments:

As I mentioned in part one of these recent posts on Photography, I got the idea to colour-code each of the locations featured in The Last Belle from watching old silent movies - in fact, I remember the idea dropping into my head while watching Broken Blossoms (made in 1919 by D.W. Griffith) where the black and white photography had been tinted afterwards so that the interior of a fire-lit shack was tinted a warm orange/red colour, while the exterior night scenes were tinted with blue. As there is a lot of cross-cutting between locations in The Last Belle I figured that slightly tinting each location would help distinguish exactly where we are within a fraction of a second of the cut, meaning we could concentrate on what the characters were doing rather than continually having to establish where we are geographically.

Most of this work was done by John Leatherbarrow in-camera as he shot the film, either by gelling the lights and/or the lens itself. After all the footage was shot and edited we both sat down with Paul Dean, a terrific grading artist at Deluxe Soho, and made final tweaks and adjustments to the colours.

One of the things I like most about working with John is that for all his technical knowledge what he's most interested in is the 'feel' you are after. After discussing a sequence for some time he would often just cut to the chase and ask me, "What exactly do you want to feel in this shot?" Once we had established that, then he was free to develop things at a technical level, and work his magic in the depths of the dark, dungeon-like camera room.
Posted by Neil Boyle at 15:23 2 comments:

Here's another of our day-for-night shots, from rough sketch to final shot:

One of the important locations in The Last Belle is 'Ripov's' bar, where our main character Rosie sits and waits for her dream date to turn up. When we were developing the script I couldn't get a clear image in my mind of what the bar would look like from the outside, and how we could get it to stand out from the surrounding row of shops and restaurants of a typical London street. Then one day I was wandering through town when I spotted a pub situated between two intersecting streets, with its door placed in the corner. I grabbed a camera, took some reference photos, and this became the basis of Ripov's exterior.

When all this artwork was ready, and the character cels complete, John shot a series of tests. These would test the overall exposure of the background itself, the degree of blue cast we would use for the night-time effect, and the individual exposures for each of the mattes used to burn in the neon and other lights, as well as any other effects such as diffusion. When we had settled on the lighting effects and exposures, John would do the actual shoot, running the film through the camera for each element, and then rewinding and starting at frame one again to burn in the next element. In the case of this shot, he would also have to re-run all the character cels with each pass so that the character would block out the areas of the matte that it was passing in front of (if you don't do this the lights will shine through the character making her look transparent).


I tip my hat to John and his amazing patience in building up our shots in this way. (And, as if the job isn't hard enough already, most camera rooms are usually situated in the depths of a basement, sealed from all natural light, and sealed from the rest of the human race too: one mis-timed interruption could ruin a shot.) Glamorous, or sociable, it isn't. But the end results can be magic.
Posted by Neil Boyle at 00:24 No comments:

Before the dawn of the digital age there was only one way to get your drawings onto the screen and that was by photographing them one frame at a time on a rostrum camera. 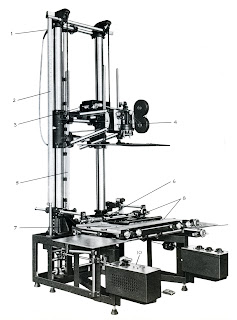 For 70 or 80 years this method of photographing animation artwork remained essentially the same, with a few developments along the way: for example, multiplane levels to create depth, or polarising filters to eradicate the appearance of dust and dirt on the cel artwork, or the introduction of early computer technology to control the incremental movements of the camera and artwork table (much like the 'motion control' technology developed for the original Star Wars).


Every frame of The Last Belle was photographed on 2 rostrum cameras operated by John Leatherbarrow.
﻿﻿So far as I'm concerned John was, and is, the best in the business. He's worked on a huge variety of projects, starting out by photographing Terry Gilliam's animated title sequence for 'Cry of the Banshee', followed by hundreds, if not thousands, of television and film commercials, as well as supervising all the rostrum camera work on Who Framed Roger Rabbit where he helped Richard Williams and Chris Knott develop the 'tone matte' technique which created the effect of 3-dimensional shadows on the 2-dimensional character artwork. John also created many of the painterly lighting effects used in Richard Williams' The Thief and the Cobbler, and it was this use of lighting that particularly interested me for The Last Belle.

One of my early ideas for The Last Belle was to 'colour code' each of the locations in the film (inspired by the tinting of black and white silent movies) so that as we cross-cut between the various locations it is instantly recognisable where we are. The traditional way of doing this would be to create these colour effects in the artwork itself so that, for example, a night-time location would be painted using blacks and blues, and the character cels would be painted in the blue range as well, creating the effect of everything being lit by inky blue moonlight. What I wanted to do was the opposite: paint the whole film in the standard 'neutral' colours of flat daylight, and use John's expertise to really light this artwork and create the correct tonal feel.

As an example, here's the artwork for one of our shots:
﻿﻿
﻿

By re-exposing the film in several passes, different effects can be built up. The above example is a fairly simple two-run pass, with the film exposed once with blue lighting to achieve the overall effect, and then once again with mattes to burn in the yellow/orange glow of the basement windows. Using this technique, with each run of the film different colour gels can be used on the lights and/or the camera lens, different exposures can be used to create bright or dark areas within the frame, and various filters can be used to create a variety of effects, for example a diffusion filter to create a soft-edged glow around a bright area. Building up a photographic image this way is truly 'painting with light'; the real magic of it for me is that the final effect on screen can be so different to the actual artwork you hold in your hand - an image of a place that exists only in the emulsion of the film.
Posted by Neil Boyle at 00:15 2 comments: 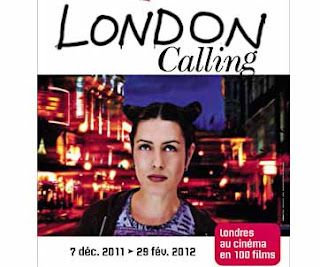 We are thrilled to announce The Last Belle will be screening as part of the 'London Calling' festival in Paris, a celebration of 100 films, old and new, set in and around London, including feature films from Mike Leigh, Ken Loach and Michael Winterbottom, and a programme of animated shorts compiled by Jayne Pilling.

And for more information on the animation programme click here.
Posted by Neil Boyle at 14:54 No comments: