Hot off the press, here's a new article about The Last Belle from Skwigly online animation magazine.
Posted by Neil Boyle at 15:44 2 comments:

Email ThisBlogThis!Share to TwitterShare to FacebookShare to Pinterest
Labels: Articles

I love how the opening titles to a film can really set the tone for what is about to follow, even if we are not really conscious of the fact most of the time. My brief to everyone working on The Last Belle was to produce a traditional style cartoon but placed in a modern day setting, so when I started to think about the titles I wanted something that echoed that idea: something that had overtones of classic 1940s cartoon text, but with a slightly modern twist.


Mark Naisbitt was the perfect choice to develop the fonts we needed as he is one of the few hand-lettering artists still left around, as well as an animator, layout artist, and technical draughtsman. Mark was trained by Raymond Guillaumet (both worked at Richard Williams' studio); Raymond did much of the lettering and technical animation at Dick's studio, and prior to that had worked on the lettering for many feature films including the early James Bond movies as well as the infamous 'floating lettering' sequence at the beginning of Barbarella.

For The Last Belle Mark started by looking at the classic Tom and Jerry cartoons because I really liked the style of lettering they had: classic 1940s cartoon style, encased in a bold white outline. I wanted to combine that with the yellow to orange graduation effect within the letters often employed in action-adventure titles like Raiders of the Lost Ark and Back to the Future. This was our jumping off point and Mark started to sketch around these ideas. 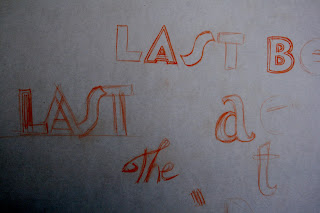 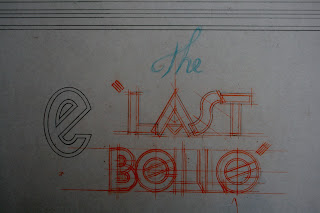 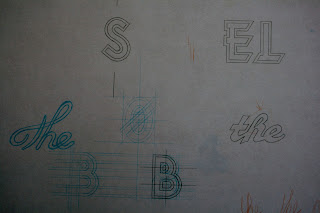 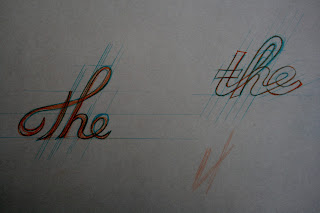 Once we'd got into a style that we both felt comfortable with Mark developed the exact structure of how each letter would be formed. This took quite a bit of tinkering because each individual letter had to work not only by itself, but also within the context of those around it - and sometimes letters would work together very pleasingly while spelling out the name of the title, but not so well spelling out the name of an actor. This is the amazing craft of font design and proportion, and there are a whole host of rules, and occasions where you can break those rules, which are beyond any training I have - this kind of stuff isn't generally taught in Art Schools any more. Because of this I loved peering over Mark's shoulder as he pieced the fonts together, using a combination of maths, geometric proportion, technical drawing, and simple 'taste'.


There  is no denying that hand lettering takes a long time, but the great thing is that you can design bespoke fonts to reflect the exact style of your film, and you can balance them far better than a computer does when it's working on auto-pilot. On the other hand, I was extremely grateful that we could use a computer to generate the roller credits at the end of the film as this would have taken an age to hand letter, and it would have been a nightmare to make last minute changes and additions to (which we had to). As ever it's horses for courses: vive la difference!
Posted by Neil Boyle at 14:10 2 comments: 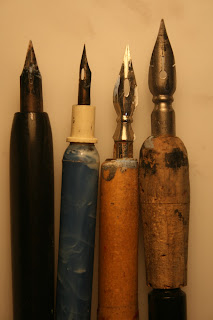 Tracing is a demanding craft, and one that has practically died out in the digital environment. The skill of the tracer was to accurately and sensitively trace with a dip pen onto cel the pencil lines of the original animation drawing. The lines had to appear fluid, with no stop and start blobs, and the thickness of the line could be controlled across a curve by varying the pressure and angle of the nib. Often the linework on the cels would be made up from several different colours and the final effect could be beautifully painterly (think Pinocchio, or Sleeping Beauty, or the original footage from The Thief and the Cobbler). The best of the tracers were, of course, astonishingly accurate.


Sam Spacey has been involved with The Last Belle since the very beginning, helping to choose colours for the characters and props, as well as painting cels and - most importantly - being the sole tracer on the project. I first met Sam on Richard Williams' feature The Thief and the Cobbler where, at the very young age of 18, she had already become one of the best tracers in the studio. If I'd animated a scene with particularly subtle movement, or a character close up, I would always request that Sam trace it; animators would often fight over who was going to trace their scenes!

One of Sam's jobs on The Last Belle was the mind-numbing task of hand tracing Wally's shirt pattern as it turns and twists through perspective.

The original character drawings were cleaned up in ink using a felt-tip calligraphy pen (if we made a mistake we had to scalpel out the offending area and stick in a new piece of paper). Then the shirt pattern was animated using a non-photocopy blue pencil. Once this had been inbetweened and finished up by assistant animator Bella Bremner the drawings were photocopied onto cel (which reproduced only the black ink lines around the character but couldn't 'see' the light blue lines), and then these cels were handed over to Sam for the tracing of the shirt pattern in blue ink onto the cel.

This was a pretty long-winded process but it gave exactly the look I was trying to achieve. I have no idea though how many hundreds of thousands of individual flowers and leaf fronds were animated, traced and painted to complete all the frames featuring Wally's tasteless shirt. Seemed like a funny idea at the time...