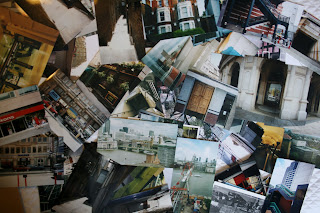 I've aquired a vast amount of photographic reference of the London landscape, collected over the fifteen years we were in and out of production on The Last Belle. It'll be interesting to see how the reference - and the film - dates as the years roll by. Already a few of the locations we referenced for background paintings have been demolished (to be replaced with the usual generic glass boxes).


﻿
﻿﻿
﻿ I've always had huge affection for old Hollywood movies that are set in London, but which were actually shot on the backlot in California - stuff like the Basil Rathbone Sherlock Holmes series, and Disney's Mary Poppins. In the days before lightweight camera equipment, and before fast lenses and film stocks (without which you often needed huge banks of lights to supplement the natural light) there was no way of being 'on location' other than to fake it under controlled conditions. And of course most of the Hollywood tycoons loved having foreign-set films being made actually just outside their offices, where they could keep a watchful eye on them (and, more to the point, their budgets). What I like most about these fake backlot 'Londons' is how they almost entirely ignore actual geography and opt instead for a kind of archetypal landscape of how we might imagine the perfect London to be. You like Big Ben and you like Tower Bridge? Who cares if they're really a couple of miles apart - just paint them next to each other on the backdrop so they look pretty together. And maybe straighten out the river in between so we can fit St Pauls Cathedral into the nice composition too.  I don't know about anyone else, but this is pretty much how my dreams work anyway: lots of correct details but all in the wrong place.

This was the approach we applied to The Last Belle backgrounds: try and get every single detail and texture right, but feel free to move things around and resize if it suits the shot or the sequence. And the strange thing is, the more 'theatrical licence' we took the more it began to feel like the real thing.

I am now no longer sure whether I'm living in the real London, or the London that exists in the film, as both of them seem as true to me as each other. Weird.

Incidentally, before signing off,  if you too are a fan of painterly effects and cinema 'fakery' check out the wonderful Matte Shot blog, a site I regularly get lost in for several hours at a time. Enjoy.
Posted by Neil Boyle at 16:54 No comments: 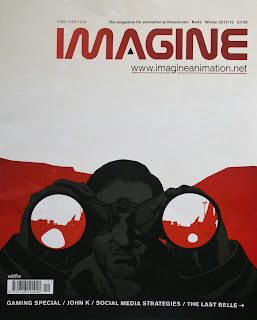 Delivering one job and immediately starting on another, not to mention exorcizing a pernicious bugger of a computer virus, all means that I've been a bit lax recently in attending to my blog posts...

But in the meantime we've updated our main web site to include a 'Press' button where we've added some press quotes and a copy of the latest article on The Last Belle from Imagine magazine. Please take a look...

Link here and then click on the Press button

Or you can browse through other bits and bobs here at the Imagine website
Posted by Neil Boyle at 11:52 No comments: