Here's my latest discovery - or rather rediscovery - unearthed in the great box graveyard of paperwork from The Last Belle: 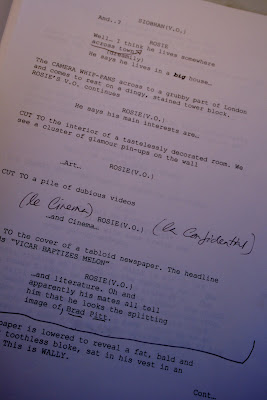 ﻿ It's a page from the Last Belle script, with notations by actress Sienna Guillory. Sienna came to the recording amazingly well prepared (as did all the cast) and she bubbled up with all sorts of very good ideas to try out during our recording session. The animation process is so slow, methodical and controlled that the recording sessions were, in contrast, an oasis of spontaneity - flesh and blood interaction, running with ideas, just trying stuff... it was a very exciting time. 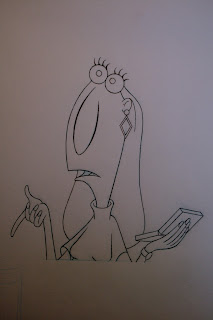 I'm not a fan of trying to do a wholesale caricature of an actor or their mannerisms. (Why do it? I'm never going to be as good copying an actor as the actual actor is in the flesh - it's no more likely than an Elvis impersonator being better than the real Elvis.) And the Last Belle characters were designed to look so stylized that their mannerisms had to be equally stylised and less naturalistic than the human performer who supplied their voice. But watching a good performer can be a great jumping off point from which you can then invent stuff. 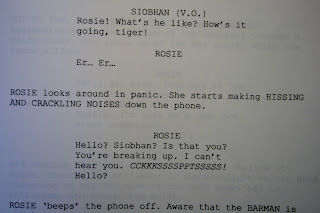 In this section of the script Rosie avoids a potentially embarrassing telephone conversation by pretending that there is interference on the line, which she fakes by crackling and hissing down the phone herself. I'd organised the recording sessions with a great engineer called Tim Lofts who is very creative and very happy to roll with things in a spontaneous way, 'riding' the controls and letting the actors feel free to take things where they like. When Sienna did her first take of this line she really let rip in a very funny way, letting loose a string of hissing, crackling and raspberry noises that none of us had expected.

When it came time to animate this sequence it meant I could really have some fun: 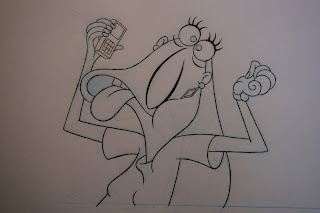 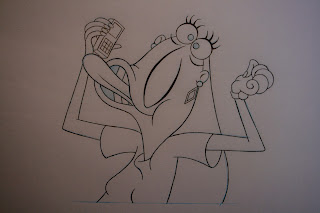 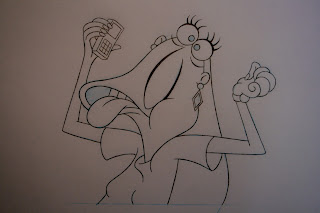 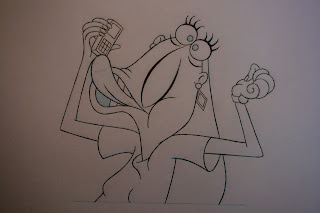 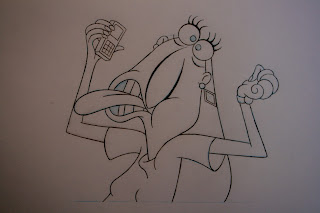 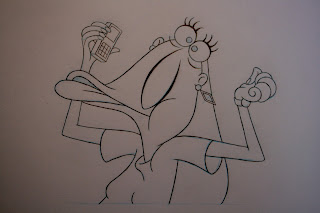 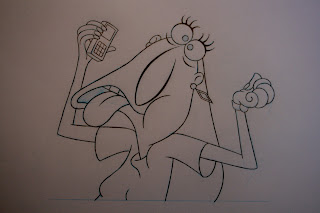 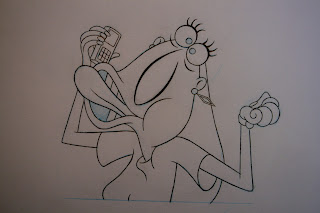 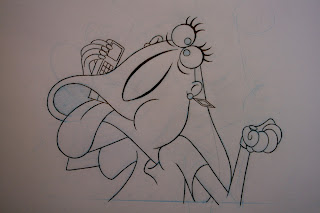 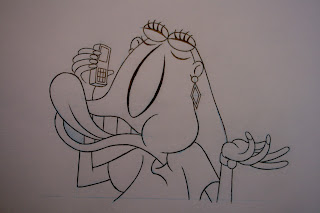 These 'raspberry noise' drawings make up less than a half second of screen time so that you feel them rather than see them. It's surprising just how far you can push a series of drawings and yet still have them feel relatively subtle in motion. And the great thing about drawing this exaggerated stuff with pencil on paper is that you can do whatever you feel - there are no rigs underneath holding you back. If you can think it, you can draw it.

Another trip down memory lane... time to head back to the mountain of boxes to see what turns up next...
Posted by Neil Boyle at 13:34 2 comments:

The Great Spring Clean continues... I'm not only wading through artwork for the film but have now stumbled across sketches for the poster design too. It's amazing how you forget all this stuff until you lift a box lid and find it all sitting there, staring back up at you.

If I'm honest I found designing the poster way more difficult than making the actual film...
.
Posted by Neil Boyle at 14:25 No comments: