As I've said before, one of my favourite parts of the film making process is research, and nothing beats switching off the anglepoise / monitor / lightbox and wandering around in the real world looking for inspiration. My co-animator Mark Naisbitt and I plunged many times into the backstreets of London searching for particular reference, and usually we did this separately, but on one particularly sunny Summer's day we took an Undeground train out to the east of London and walked back to the centre without any particular route plan. The principle reference we needed was imagery of tower blocks and a high angle shot looking over the distant cityscape so we just wandered around and followed our noses to whatever looked promising off in the distance. In the course of this journey we stumbled across many other interesting bits of architecture, brick texture, victorian tiles, crooked backstreets, amazing rooftops, street signage... and a welcoming ancient pub that refreshed us on our quest. I'm the first to admit an addiction to Google Image but nothing beats actually going to the source and seeing, feeling, hearing, smelling and tasting the actual thing. Unless your film is set on Mars, I guess.

Wandering around searching for location reference helped us in two ways (three ways if you count the health benefits of walking endless miles): firstly it gave us detailed visual reference for specifc shots we'd already come up with, and secondly it inspired stuff we wouldn't otherwise have thought about. I remember quickly scribbling out this idea for a shot featuring a zig-zagging flight of stairs: 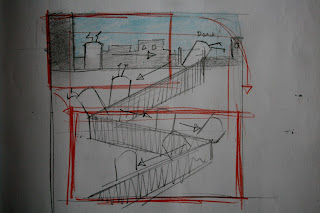 Walking to and from work over the next few days I kept an eye out for any real location that might vaguely match this set-up, figuring that a real place could give me far more in the way of details and textures than anything I dreamt up from pure imagination. Then one lunchtime I walked past this: 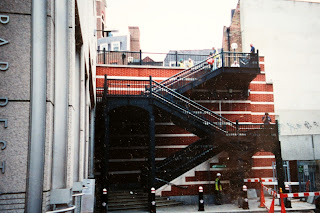 And another piece of background art was born: 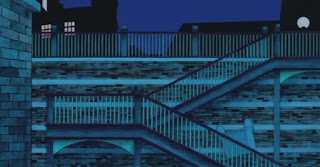 Other times it would be less about seeking out a specific location and more about a location creeping up on us and offering inspiration. I remember during the scripting process that I'd sketched out this idea for a shot showing Wally falling into some telephone wires and being flicked back up into the sky: 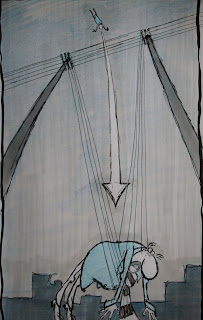 I showed this sketch to Mark and after looking at it for about three seconds he said, "There aren't any telephone wires on poles in central London."

I shrugged and replied, "Yeah well, y'know, this is a cartoon. We can have a little artistic license can't we?"

"There aren't any telephone wires on poles in central London." he repeated, frowning.

And I had to admit he had a point. But I was buggered if I could figure out how to achieve the same effect without using stretchy telephone wires. And I didn't want to lose the shot.

Then one night, a whole month or two later, I was sat in the car with my girlfriend as she drove us home along the Thames embankment, idly chatting about our day... and there it was! The answer to my problem: the Albert Bridge, lit up with a thousand fairy lights. "That's it!" I yelled out loud, nearly causing a collision.

The next day I raced back to the bridge with my camera, and trudged through the heaving, pissing rain (the downside of not using Google Image) to take this photo: 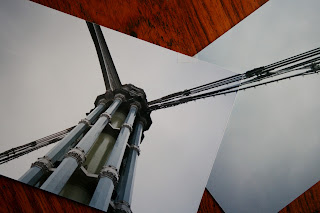 And from this we found the solution to our Falling-Into-A-Bendy-Wire problem: 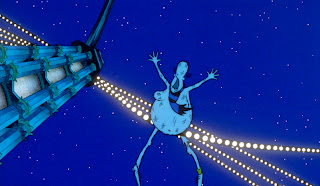 Well, OK... the real lights on the real Albert Bridge aren't actually on bendy wires, but like I said, we can have a little artistic license, can't we?
Posted by Neil Boyle at 15:55 No comments:

I was just clearing away some boxes from around my desk at home (the drawing board is needed this weekend, thanks to a looming commercial deadline) and I came across more rough sketches of the Ripov's Bar exterior. It's funny leafing through this stuff so long after the sequence was finished - although I remember doing the final backgrounds and animating the characters I can hardly remember all the rough sketches and design ideas that preceeded them. It's like flicking through a lost diary you don't ever remember having written...

I found a bunch of other doodles, sketches and photo reference in these boxes - I could easily lose an afternoon reminiscing through this stuff... but my commercial deadline is beckoning. More next time.
Posted by Neil Boyle at 14:45 No comments: