Back to the Digging - part 3

The hunt was on for a new shirt design. First of all I needed a shot of a shirt shop (how's that for a tongue-twister?) I made this horribly crude sketch: 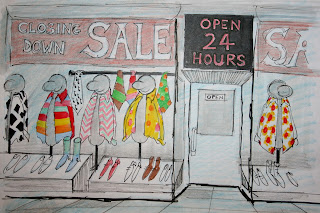 I was struggling to draw the shirt shop because - as anyone who has ever set eyes on me will agree - fashion is not my strong point. In fact I don't even have enough fashion sense to come up with a design that has a lack of fashion, which is what I needed in this case. So I turned to Last Belle producer Rebecca Neville, who luckily is not only a great producer but a dab hand with the pencil too. And here are just a selection of the designs she came up with: 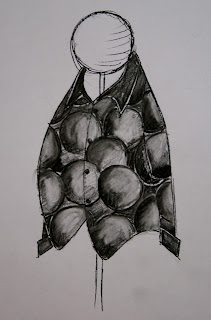 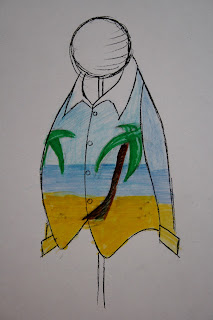 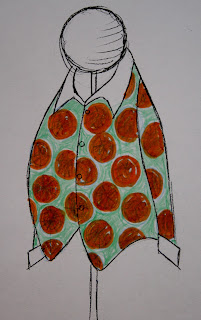 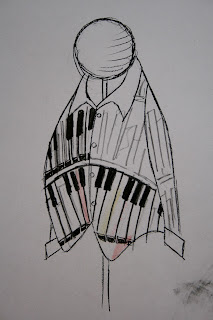 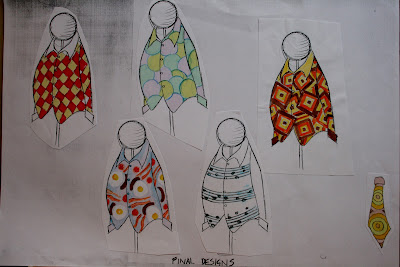 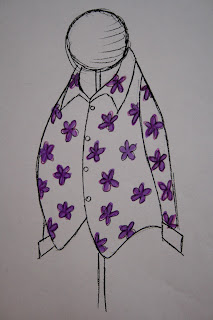 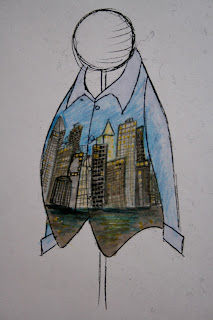 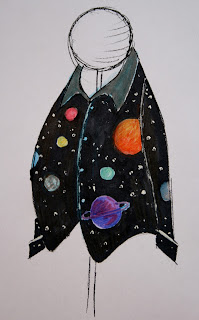 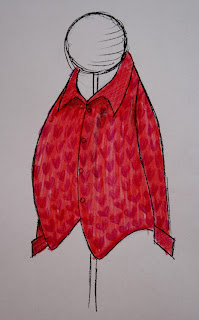 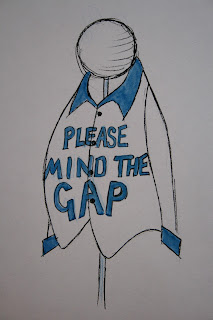 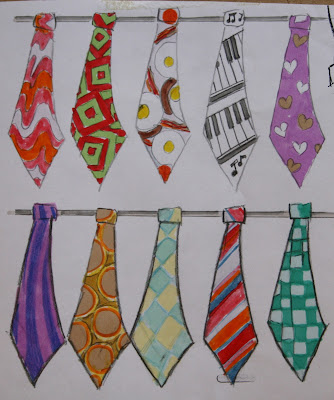 And there are many, many more...

I finally decided on a more geometric pattern that I thought would be OK to hand-animate through the various perspectives required, and made this sketch: 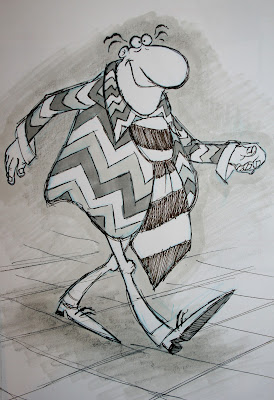 But early on in this re-writing process I lost the whole 'getting a new shirt' sequence. Wally started with his flowery shirt, lost it, and remained semi-naked for the rest of the film. It made the story flow faster. 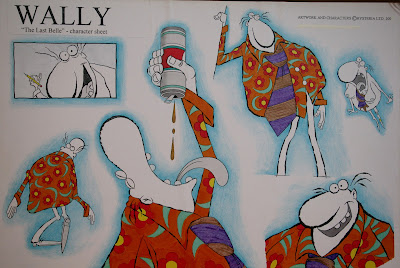 All the animatic and design work we had done on the New-Shirt sequence got trashed. Or so I thought until it turned up at the bottom of a storage box. (And if I hadn't stumbled across it for this blog I doubt I would have even remembered this sequence was once planned.)

I'm as surprised as anyone at the things that crop up on the pages of this blog.

Back to the Digging - part 2

Having mentioned in the last post how certain ideas can lead nowhere, I've just unearthed a perfect example from the bottom of a storage box. Here are a bunch of drawings I made from a part of the script that ultimately got cut out before getting anywhere near the animation stage.


In the early drafts of The Last Belle script our drunken character, Wally, haplessly journeying through London to reach his date on time, had his bad-taste shirt (but not his tie) torn off during a slapstick incident and then needed to realise how ridiculous he looked, before deciding to buy another - equally revolting - replacement shirt. When I started to think about this sequence I played around with how to reveal to Wally his own state of undress. Here was the first attempt at that moment of self-revelation, scribbled in a sketchbook: 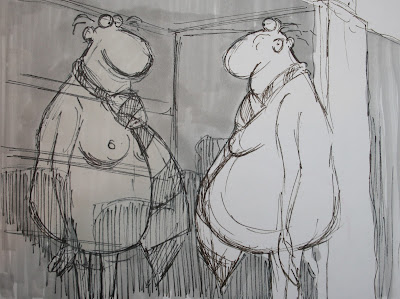 The idea was he'd just catch sight of himself in a shop-front reflection. But then I figured there would be extra humiliation for him if he saw himself reflected many times over: 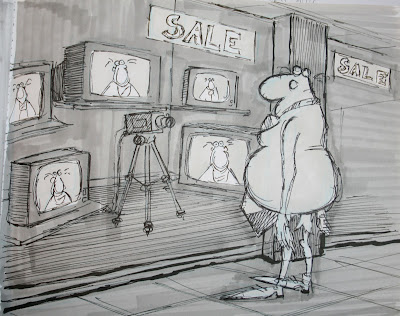 So the idea of a TV store came up (these sketches can be dated by the lack of flat-screen TVs!) This seemed a better idea so I began to draw up some animatic panels:

﻿He flies across the street (from a previous bit of slapstick)... 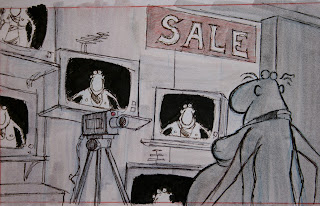 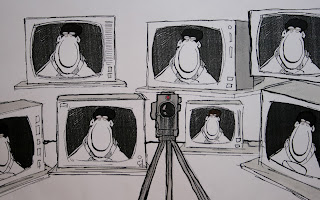 ...and sees himself blinking back.

So far, so good. But then he had to go to a shop and find a replacement shirt. And the new shirt needed an even louder and busier pattern than the original.

Next week's post: the hunt for a new ghastly shirt design...

Back to the Digging

At last! It's 2013 and I've had a bit more time to continue digging through the mighty paper mountain of Last Belle artwork. My digging muscles are rested, my eyeballs are refreshed and the hangover has finally worn off.

I always find it strange to look back on how a sequence, or even a single image, first came to life (if I hadn't kept the artwork I'd never remember any of this process). I don't know about you, but most of my ideas flicker into life during moments of almost-boredom; the morning rush-hour journey into work is a good place for daydreaming, crushed into a train with three times too many people, standing with my face sandwiched between a fellow passenger's rucksack and another's armpit... this is a good time to escape reality and let the imagination fly. Sometimes you get big conceptual ideas, sometimes just a small idea about how to stage a simple shot.

Here's a close-up composition of Rosie I scribbled years back, to go with a bit of her scripted dialogue: 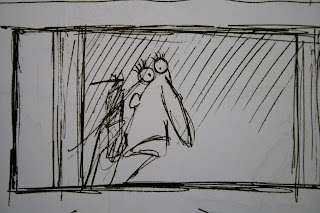 I didn't even have a final design for Rosie at the time but I knew I wanted the shot to be blocked this way, in her bedroom doorway, holding her phone. A few years later I did the animatic drawings for this shot, and introduced a bit of business with a teapot for added interest (and in this case I was beginning to hunt around for colours to use in this sequence too so I did the animatic drawings with coloured pantone pens): 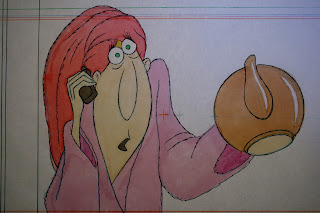 In developing the sequence it made storytelling-sense to show a passage of time so I drew Rosie as if she'd come from the shower, dressed in a robe and towel-turban. (Just an aside: I am endlessly fascinated by how it is that all girls seem to have learned to tie towel-turbans - is this knowledge ceremonially passed down from their mothers? It looks impossibly complicated to me. Whether or not it's difficult to tie towel-turbans in reality, it's certainly a pain in the backside to draw and then rotate them in perspective...)

Another year or two down the line I finally found the time to animate the shot and add the background design... as well as change the colour of the teapot to something more sympathetic to the colour scheme. Here's the final cel set-up: 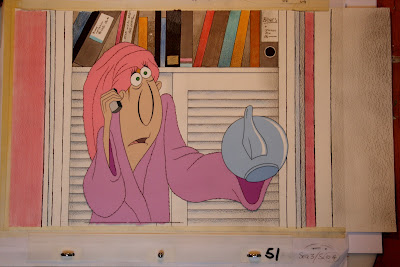 On a specific point in the dialogue I wanted the camera to crash-zoom back into a wider view of her bedroom. Again, here's the initial idea scribbled down in haste: 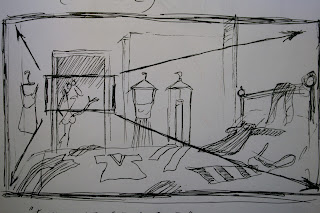 And here's the final cel-setup against the background artwork, showing her bedroom stuffed full of possible outfits for her forthcoming date: 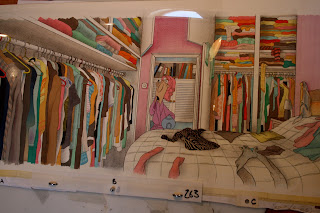 In this case nothing really changed between the initial idea and the final shots, bar a few minor details. But in other cases you ditch the initial idea and end up following a completely new path... or stranger still, you follow several new paths before realising that you've ended up back where you began, with your initial idea. You never can tell, right? Which is - I guess - what makes the creative process such endlessly unpredictable fun.

And such a frustration to the accountants.

Happy New Year to one and all! To kick off our year we are pleased to announce that The Last Belle will be screening at the Irvine International Film Festival, California, on Sunday 20th January. 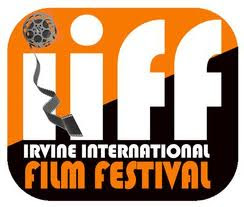 There is a great and varied selection of films screening at the festival this year: short, long, live action, animation, documentary, drama... even a lifetime achievement award for Martin Landau... so something for everyone. To find out more click HERE.
Posted by Neil Boyle at 09:20 3 comments: