It's been a few weeks since I've visited this blog, and that's for the usual reason: once again the impending delivery date on a commercial is hurtling towards me... Ground Rush!

...But on the subject of delivery dates, and keeping a job on track, I've recently turfed out a lot of paperwork from the Last Belle artwork boxes that's entirely to do with the production side of that project: 35,000 pieces of artwork spread out over a 15 year off-and-on production period, produces a certain amount of organisational paperwork. And in a strange way those charts and lists have their own visual beauty. 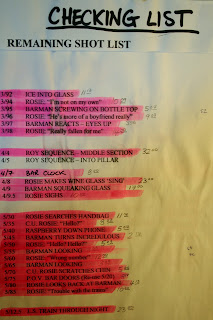 A lot of us Artsy types have an innate distrust of bureaucracy. I think I was born with it. Many studios descend into a them and us mentality when it comes to the 'Suits' and the 'Artists'. And from that mentality it's a short step to figuring that organisation = non-creativity and therefore creativity = anarchy. But I have to confess that in the first years of my career I soon came to realise all the artists I really admired were also amazingly organised people. Whether a director/producer in charge of a whole movie, or an animator in charge of a single element in a single shot, the most efficient, the most talented, the fastest, and frankly the most relaxed, artists tended to be the most organised from the outset. 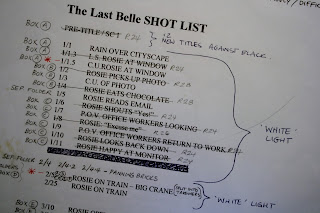 Now, I'm no fan of paperwork. I once worked on a film for a major studio where I was confronted with endless, endless paperwork. One monday morning I nearly became a broken man when I received 96 separate forms to fill in with the Production Manager, outlining the projected work me and my studio was going to achieve by the end of the week. To fill out the forms with all the projections required -which would have meant dozens of meetings with all the department heads, and dozens of individual artists and technicians - would have taken several days. And this meant that by the end of the week I would have projected having achieved absolutely no work at all because I was too busy writing out forms about the work I should have been doing if I wasn't writing out forms. Kafka would have loved it. 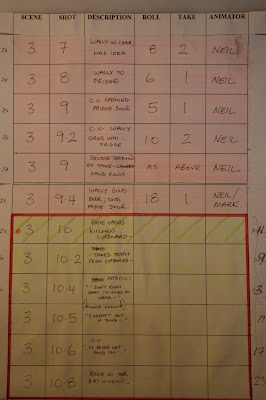 Over the years I have stolen, or adapted, many organisational tricks from the better productions. But the tracking system I love the best is the 'Route Sheet'. It's been widely adopted and adapted now, but when I started out on the film Who Framed Roger Rabbit (which, incidentally, was brilliantly organised) the Route Sheet system was introduced into Disney from Richard Williams's studio, where it had been developed by Williams and Roy Naisbitt. Like all great ideas it's as simple as hell.


Here's how it works: each shot in the production is represented by a horizontal column. On the left of this column is a picture of the shot (printed from the storyboard, or layout, or just sketched in by hand) and space to write in the shot number, the scene number, the length of the shot, and the animator. To the right of this the column is divided vertically into boxes representing whatever you need: animatic, layout, rough animation, clean-up, painting, rigging, compositing, whatever... These sheets are pinned up around the walls in their correct sequence order. At a weekly meeting all artists and production people gather around the route sheets and the director or producer begins to shade them in (traditionally in blue col-erase pencil!): Animation all done on shot 10? Shade the 'animation' column in blue. Animation only half done? Shade only half the column blue. The animation on shot 30 we thought was done, but has to go back into production for some reason? Erase the blue pencil so the column is white again.


It may sound archaic doing all this with pencil on paper, rather than on a computer, but here's the great thing about this system: it's available to everyone on the production, at all times, and in one glance. If you see a lot of white columns on your walls you know there's a lot of work to do, but if you see a lot of blue then you're steaming. As an artist, if you want to see where your shot comes relative to all the shots around it, it's up there on the wall, in its correct sequence order. If you're a production manager and you need to see where work is getting bottle-necked it's obvious with one glance. The beauty of this system is that it doesn't rely on number-crunching done in the privacy of a small back room somewhere. Instead it is a visual, instantly readable, democratic display available to everyone who walks past it, from the producer to the runner. It makes everyone feel part of a coherent whole, and everyone can watch the project grow.

I've never seen a better tracking system. And it works just as well for a thirty second commercial as it does for a ninety minute feature film.

There is little that gives me more pleasure at the end of a production than filling in those final blocks of blue, knowing that a project has finally been put to bed.

On the subject of which, time to pick up that blue pencil myself... I'll be back here in BlogLand shortly.
Posted by Neil Boyle at 16:34 3 comments: 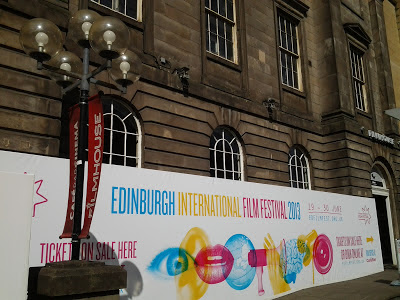 Last Saturday was something of an historic event in the animation world, as the Edinburgh International Film Festival hosted a major retrospective of the career of master director/animator Richard Williams, timed to coincide with his 80th birthday this year.

Organised by the ever-energetic Iain Gardner, the programme pulled together nearly two hours of animated excellence from Dick's fifty-five year film career, work that earned him hundreds of awards, including two BAFTAs, an Emmy, and three Oscars.

Included were his first short film 'The Little Island' (1958), the winner of his first Oscar 'A Christmas Carol' (1971), and other shorts including 'Love Me, Love Me, Love Me' (1962) and 'Circus Drawings' (2011).  Then there were title sequences, among them 'The Charge of the Light Brigade' (1968), 'The Return of the Pink Panther' (1975), and 'The Animator's Survival Kit - Animated' (2008). Also included were the opening scenes from 'Who Framed Roger Rabbit' (1988) and the original trailer for 'The Thief and the Cobbler' (1993). Peppered throughout were a handful of the 2500 commercials produced at the Williams studio over the decades, including 'Mini Cheddars', 'Shell Oil' and 'Long Life Cat'. 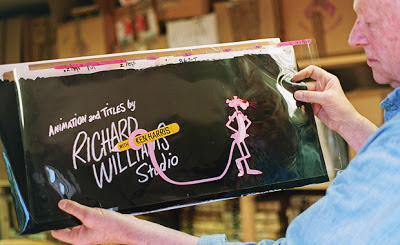 The screening was rounded off with a quick interview hosted by Iain Gardner, and a short Q&A session with the audience.

Wonderful to see all this work up on the big screen - and all in the correct aspect ratios, with the EIFF technical crew up in the projection booth swiftly segueing from 4:3, to Widescreen, to anamorphic Cinemascope between reels, reflecting the changing shape of screens over the course of Dick's long career.

I was joined in the audience by Dick's long-time associate Roy Naisbitt (who, as regular readers of this blog will know, designed the Underground tunnel sequence for me in The Last Belle) and Dick very graciously acknowledged our contributions to some of the work on screen, and the support of his long-time producer, and wife, Imogen Sutton. In a happy final word, Dick pointed out he is not the retiring type and is busy working on his next film project, producing animation he feels is by far the best he has ever achieved. As the event came to a close, the audience rose spontaneously and delivered a standing ovation.


I had a rather jolly time in the bar afterwards, talking with people from the audience: film fans, animation fans, students and professionals; some familiar with the work, some seeing it for the first time, all seemingly inspired by it.


﻿
﻿
Congratulations to Iain Gardner for organising and choreographing the event so smoothly (and my personal thanks to all the EIFF staff for being wonderful hosts). But most of all, congratulations to Richard Williams on his eightieth birthday, and for continuing to be such an inspiration for a whole new generation of animators and film-makers.