Here's a lovely new post from 'The Thief and the Cobbler' blog featuring a piece of Roy Naisbitt's work from the movie of the same name:  CLICK HERE

As well as creating layout artwork, Roy created a bunch of amazing cardboard contraptions over the years, some of which really ought to belong in a museum of cinema curiosities; all of them beautifully elegant solutions to the limitations of the pegbars on a rostrum camera (and in those pre-digital days everything had to work physically under the camera lens). I remember working all night with Richard Williams and Roy, trying to get a shot for The Thief ready for the camera by 9 a.m. the next morning... at about 3 a.m. I realised that there weren't enough panning pegs in the shot to keep all the separate artwork levels moving in correct perspective and registration, and I sank my head into my hands and felt like sobbing in defeat. Roy gave me a hearty slap on the back, and told me not to worry, he'd sort something out. And over the next few hours, fuelled by a few cups of coffee, he created an amazing 'floating pegbar' system with a few sheets of cardboard, a scalpel and sticking tape. It was entirely different to the system detailed in the link above, a completely bespoke solution to the problem of that particular shot. The artwork went down to camera at the appointed time, and was shot successfully first take.

Not the last time Roy was to save my bacon.


I'm in the middle of an intensive work schedule at the moment (and no complaints about that) so the sorting of Last Belle artwork has ground to a complete standstill for a while... 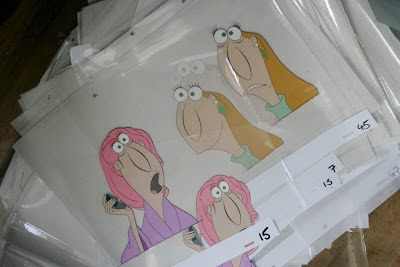 But... You know that feeling you get when you wander around an art gallery and the eyes of the portrait paintings seem to follow you around the room..? Well, I currently have several hundred ping-pong ball shaped cartoon eyeballs glaring at me while I try to concentrate on other things:


I really do need to put this stuff to bed. I feel like my every move is being watched by several hundred little alter egos...

We're pleased to announce that The Last Belle will be playing at this year's Foyle Film Festival. 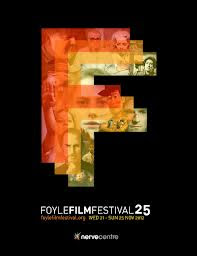 The festival, running from the 21st to the 25th of November, has a great lineup and we're excited to be a part of it. For more information on the festival and screenings click here
Posted by Neil Boyle at 16:22 No comments:

I've been absent from these pages for a couple of weeks, prepping a couple of jobs, so there's not been much chance for more rummaging through old artwork boxes... but continuing on from the last post I have come across this bar sheet, lodged at the bottom of one of my drawers: 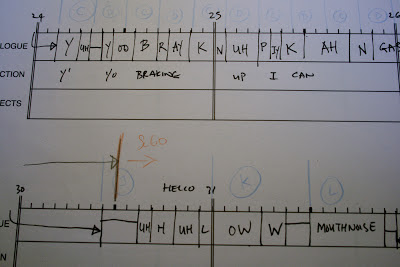 This is part of the dialogue breakdown of Sienna Guillory's performance from the sequence covered in the last post. (For those not familiar with what 'dialogue breakdown' means, it's taking the recordings of the actors voices and writing out exactly what sound is being said on exactly which frame. The animator can then take this information and draw the correct mouth shapes to create the illusion that the animated character is actually speaking the words with complete synchronization.) The dialogue for The Last Belle was analysed using the 'old-school' analogue system, meaning the original recording was transferred onto magnetic film stock and broken down frame by frame by rocking and rolling the sound backwards and forwards manually. This was done by Rod Howick, who has been a major name in the London animation scene for some decades. Rod's a real craftsman, and he's developed an amazing ear over the years, meaning his phonetic analysis of the dialogue, where exactly one sound blends into another, and even where the breaths occur between the words, is always completely spot on.

These days most breakdowns are done digitally, which has the benefit of providing graphic displays of the soundwave peaks and troughs. But if I had to do the work myself (and I have a few times on smaller jobs) I actually prefer the old analogue method - to my ears it's way more intuitive to run back and forth over the original sound, feeling your way through the sound blends: of course, the great benefit of analogue sound is you can run it back and forth at any speed without it collapsing into juddering digital globs. But as always with these things, it's more the operator than the technology itself that leads to great results. Whatever system you use, breakdown is a great skill, and it was wondeful to have such a fine craftsman as Rod bringing his decades of experience to The Last Belle.
Posted by Neil Boyle at 15:01 No comments: